When it comes to cooking pasta, the question is often, “how long to boil pasta” instead of how to do it.

Most of us know we need to boil it in water, but for how long?

In this guide, we’re going over some of the most common types of pasta, including spaghetti, macaroni, and raviolis to give you a guide on how long to boil each type.

You might be surprised that each type has a slightly different cooking time for pasta!

This is down to how large the noodles are and the shape of them.

For instance, the spaghetti noodle cookies relatively quickly and evenly due to its shape.

The bowtie pasta, on the other hand, has a bit of an uneven shape and cooks quicker on either end than right in the middle.

Others, like macaroni, are small noodles and can cook on the lower end of the pasta cooking time spectrum.

How Long to Cook Dried Pasta

From the spirals of fusilli to the classic spaghetti to ravioli, each has a slightly different boiling time and often it is down to individual taste and testing (check out our guide on how to tell if pasta is done here).

In this guide, we’ll mostly focus on dried pasta.

That is, pasta that you boil from dry like boiling a package of dry spaghettis from the pantry or dry elbow macaroni.

As a general rule, you should cook dried pasta for 8 to 12 minutes.

And don’t forget to check out our guide on how to keep pasta from sticking!

How Long to Cook Spaghetti

Spaghetti is the pasta most people often default to, so it’s no surprise that the average pasta cooking time is largely based on this type of noodle.

With long strands with no blunt edges (unlike fettucine), spaghetti doesn’t take a long time to cook compared to some other noodles like bowtie pasta.

You should cook spaghetti for about 8 to 11 minutes.

Make sure to check at around 8 minutes, because your altitude and boiling process could impact how long it takes.

Don’t ever just read the time on the box and then assume it’s ready.

Dig in with a fork and pull some strands out to check with your tastebuds!

How Long to Cook Ravioli

Ravioli is a filled pasta, shaped like a square with a type of filling inside like spinach and ricotta cheese.

Typically, ravioli is sold as a fresh pasta, not a dried one (check out our guide on boiling fresh pasta here).

For ravioli in particular, you should boil it for only 4 to 6 minutes.

Bowtie pasta, or farfalle, looks just like a bowtie!

It’s like someone took a flat rectangle and squished it in the middle.

The middle usually takes longer to cook than either end, which means you do need to make sure to test the whole noodle when you’re figuring out if the bowtie pasta is done.

This type of pasta usually takes a bit longer to boil.

How Long to Boil Fusilli

Fusilli are a wonderful type of spiral pasta.

They’re often used in dishes where the pasta should be able to “soak up” the sauce instead of it slipping off.

Because of all of the spirals and crevices, the sauce coats the pasta beautifully and gives you delicious flavor in every bite.

You should boil fusilli for around 10 to 13 minutes.

How Long to Boil Penne

Penne are the “tube” type of pasta.

With a cylindrical shape with an empty hole inside the length of the tube, you’ll typically use penne in dishes that specifically call for it, like “penne pasta with pesto.”

You can also use it in really any pasta dish, but the unique structure means that they go best with saucy-pasta dishes so that the sauce can fill in the hole in the penne.

You can get a real mouthful of sauce in every bite.

How Long to Boil Fettucine

Fettucine is the length of spaghetti, but instead of being rounded, it’s flat.

You have probably heard of it with dishes like the very popular fettucine alfredo.

You should boil fettucine for about 9 to 12 minutes.

How Long to Boil Rigatoni

Rigatoni is a heavy hitter when it comes to pasta dishes.

It’s another cylindrical pasta shape, with a big hole inside like a penne.

But it has a much wider circumference than penne.

Rigatoni is often used in pasta dishes that really emphasize the sauce, as it can soak up a lot of sauce in the middle of the noodle.

You should boil rigatoni for 12 to 15 minutes.

How Long to Boil Macaroni

Macaroni, shaped a bit like a semi circle with a hole in the middle (think penne, but thinner and bent) is the classic noodle used in things like macaroni and cheese and macaroni salad.

This is a smaller pasta noodle and doesn’t need as much boiling time as others.

You should boil macaroni for 9 to 11 minutes.

How Long to Boil Conchiglie

One of the most fun pasta types to say, “conchiglie” is shaped just like a conch shell, but in pasta form.

It holds the sauce in its conch-like cavern and unlike penne, macaroni, and rigatoni, is less of a cylinder and more of a short, stubby shape.

You should boil conchiglie for 8 to 12 minutes. 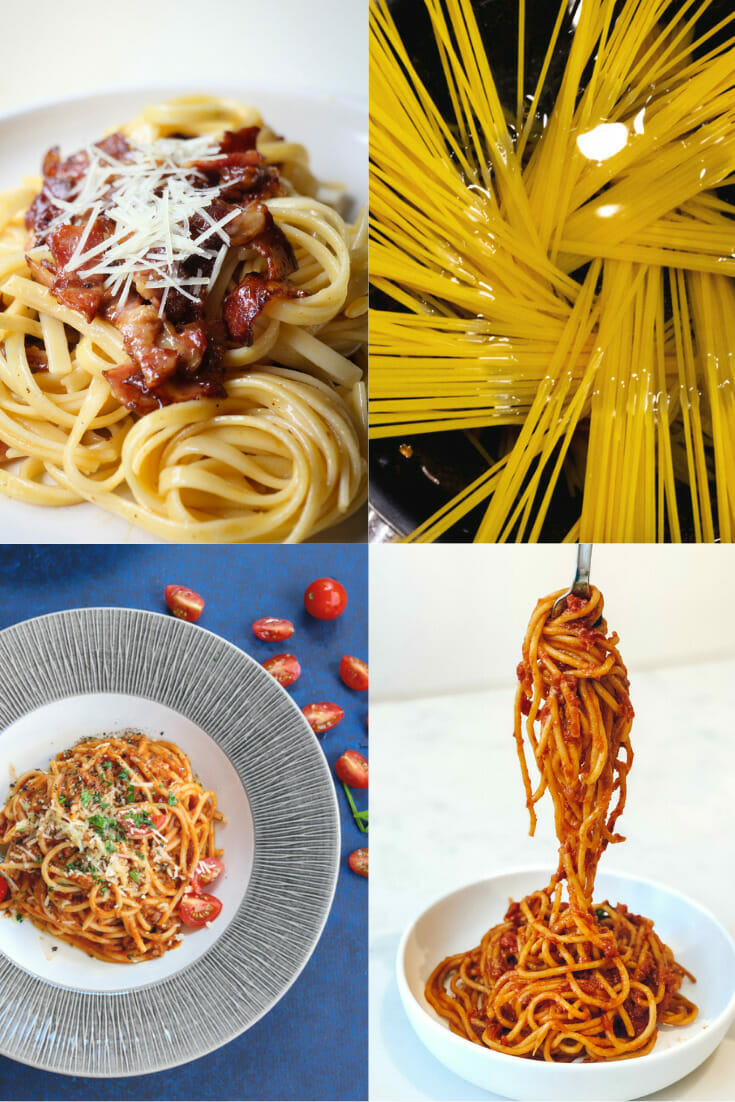